Our journey to learn foods by alphabet continues to expand our culinary knowledge. Today, we have arrived at foods that start with the letter S. We will cover all types of food, from fruits, meat, and vegetables to drinks and spices!

You will learn different ways to cook them and facts about their history. Kick back and enjoy this fun reading piece!

Foods that Start with S

Saffron is an ancient spice that people have used throughout history as a medicine, ritual offering, perfume, and dye. Today, people like to use it in cooking as a spice and enjoy its subtle floral but earthy taste. It’s often added in seafood, rice-based dishes, stews, and sauces. Saffron is a high-priced spice mainly because it’s an extremely labor-intensive crop.

In the culinary circle, people view sage as one of the absolute essential herbs for everyday cooking. Meat lovers enjoy its mild taste that ranges from slightly peppery to lightly minty. Did you know the sage actually comes from the same family of herbs like mint? Ancient Romans revered it as a medicinal herb because of its healing effect on ulcers, digestive problems, and a sore throat.

Salmon is an oily fish rich in omega-3 fatty acids. The natural red hue of the flesh adds color to the dish, and food enthusiasts enjoy its subtle refreshing taste. You can smoke it, bake it, grill it, or even poach it, but my current favorite method is to Sous Vide Salmon!

Salad is a mix of food that often consists of vegetables, fruits, meat and often at least one raw ingredient. My favorite part of a salad is the dressing, which can be anything from olive oil and ranch dressing to sauces and cream.

Salami demonstrates the best example of creative things you can do with beef or pork. It is essentially ground pork or beef that is air-dried and fermented as part of the curing process that turns it into a sausage. This deli meat first came from Italy, but its popularity has spread to many parts of the world! Add it into a sandwich, toss it in a salad, or use it as a pizza topping!

Salsa is a thick sauce that often consists of chopped tomatoes, onions, and most importantly, pepper. Heat is the most notable element in a salsa, which is why peppers are a must. You can enjoy salsa as a dip for your chips or spread it on foods such as tacos as a dressing. Use it as a topping for a wide variety of cooked, grilled, or baked food items!

We mine salt from rock or evaporate it from ocean water and use it primarily as a flavoring agent for our food. However, did you know that salt can preserve food too? Beef jerky, some types of fish, pickles can extend shelf lives by soaking in salt.

The samosa is a popular snack that originates from the regions of Central Asia and the Middle East. It is a pocket of triangular pastry that contains all sorts of filling from meats to cooked potatoes, peas, onions, and more. Just remember to deep fry it first before eating it!

Some sandwiches contain meats, vegetables, and cheese, while some are just as good with a spread of your choice. Our favorite is Steak Sandwich, which is comforting, healthy, and delicious!

Sangria is a sweet and tart mix of red wine, chopped fruit, added alcoholic spirit or liqueur, and other spices. It’s refreshing, fruity, and great for summer parties.

Sardines are short-lived fish that makes for nutritious and tasty meals. They are rich in vitamins and minerals, and you can enjoy them grilled or as a salad dressing. Some creative recipes have them as pizza toppings or as part of a sauce that you can have with pasta. Check out our Sardine Pizza for a delicious sardine recipe.

This dish comes from Japan and consists of raw seafood that has been sliced thinly during preparation. The most common type of meat that you’ll find used in Sashimi is tuna, salmon, and yellowtail. They all have mildly fishy flavors and a rich, smooth taste, and will melt in the mouth with each bite! Soy sauce and wasabi are often served with sashimi.

Take any form of minced meat and encase it in a cylindrical skin, and you’ll have a delicious sausage. Relish it deep-fried, broiled, baked, or grilled for the ultimate meaty taste. A sausage can contain different types of meat that sometimes hold a variety of spices. Some of my favorite sausages include the breakfast beef or pork sausage, the spicy Mexican chorizo, and frankfurters that are great with hotdogs!

Scallions are a key ingredient in most savory dishes. They’re closely related to onions, shallots, leeks, and garlic, but people love scallions because of their milder onion-like taste. You can add them to sauces, meat-based dishes, saute recipes, and use them as a garnish!

English scones are similar to American biscuits. It’s usually sweetened and often glazed with egg washes. Eat them as they are, or with a spread like butter or jam. Complete your snack with a cup of tea, as this is the universally accepted way to enjoy scones.

One of the best ways to enjoy milk and other types of dairy is in a shake. That’s right! They are a fusion of milk, cream, ice cream, and sweeteners that are mixed together in a blender. Some varieties of shakes have fruits in them too!

Shallot is the mild variant of the onion with its sweet yet sharp and acidic taste. Cooks often use it in dishes where they prefer a more subtle flavor.

A shellfish is any sea animal whose body is covered with a protective shell. Some popular shellfish include crab, oysters, and lobsters. The ways to cook them range from steaming, broiling to pan searing and grilling!

Both sherbets and ice cream are frozen desserts, but sherbets contain far less milk. Fruits are also an essential part of a sherbet recipe that sets it apart from other icy treats. Many people mistake sherbets for sorbets, but the lack of dairy or eggs in the latter is how you can differentiate them.

The name shortcake comes from the use of short (fat) in baking back in the Old English days. Today, shortcake often refers to a crisp and crumbly cake made from butter. People enjoy it not just for its sugary goodness but also for its crumbly texture. The boundless creativity of food lovers across the globe has led them to create various types of shortcakes, including blueberry, chocolate, and our personal favorite, the strawberry shortcake.

From the love of coastal sea exploration, people developed a taste for eating shrimp. Fishers harvest tons of shrimp every year, which is proof of the delicacy’s popularity. Its tender flesh absorbs the flavors of spices easily during the cooking process. The traditional ways to cook shrimp include stir-frying, baking, or boiling, but as it’s so easy to get overcooked, our favorite method is Sous Vide Shrimp.

What happens when you take your favorite fruits, berries, and pulse them all in a blender? You get a smoothie! People often mistake shakes with smoothies, but smoothies usually contain much less milk. There are as many different types of smoothies, and you can even make vegetable smoothies!

Snow peas first came from the Mediterranean parts of Europe, right alongside regular garden peas. People enjoy their mildly sweet flavor, complimented by their crisp texture. Relish them slightly sautéed in some butter or eat them raw in a salad!

Thanks to the meaty texture of its flesh and mild taste, this ocean fish is growing in popularity. Just like other fish, you can enjoy your swordfish grilled, baked, or pan-fried. I find that it goes particularly well with a freshly made salad or sauteed greens.

Soda was first created when people learned to pass carbon dioxide through drinks to infuse them with gas. The gas contributes to the fizzy taste in each sip. Today, soda is one of the most common drinks available in shops and restaurants all over the world!

Out of all the species of legumes in existence, the soybean is perhaps the most versatile. Many food items come from it, including soy sauce, tofu, soy flour, soybean oil, soy milk, and so many more. Have you ever eaten edamame? Then you have consumed soybeans in their immature form. You can also cook dried soybeans in stews or adding them to salads!

This Italian pasta is the long, thin, cylindrical noodles that can be softened by boiling. The most popular spaghetti recipe is of course Spaghetti with Meatballs. But you can also have it with a thick sauce and a side of veggies like spinach.

Spinach is one of the most popular vegetables. It delivers a wealth of vitamins and minerals such as iron, potassium, vitamins E, C, K, and more! It is easy to prepare and is a delicious accompanying vegetable to almost any dish. Lightly saute it, steam it, blanch it, or eat it raw in a salad of your choice!

Did you know squash is actually considered a fruit? It’s a term that collectively classifies several fruits in the family of zucchinis, pumpkins, butternut squash, delicata squash, etc. Depending on which squash you prefer, the method to cook it can differ. You can boil them, bake them, turn them into soup, toss them in a sauteed dish, and serve them as appetizers, starters or sides!

There’s nothing better than a satisfying steak dinner. But there are different types of steak which vary by tenderness, flavor, and price. I like to cook my steak on a grill, but it can also be baked or pan-seared.

Strawberries are loaded with vitamins, antioxidants, and fiber! Many love to use them in desserts such as cakes and frozen delights, and you can also add it to drinks like Starbucks Strawberry Acai Refresher. Did you know that a regular strawberry can carry up to 200 seeds?

Where there is sweetness, there is often sugar! Most of the world knows this nectary carbohydrate in its white or brown granulated form. From raw sugarcane, manufacturers turn it into the powders and cubes that we use to sweeten most things we eat or drink. Nobody can deny sugar’s integral role in creating candies, desserts spreads, and much more!

The most basic syrup is a mix of sugar and water, cooked down to a thick consistency. From this base, cooks have made many types of syrups such as maple syrup, corn syrup, lavender syrup, orgeat syrup, and more. As a condiment, a syrup sweetens anything from drinks and cocktails to fruits and cakes!

In our series covering foods that start with a specific letter, this has been one of the longest. There are more that we haven’t mentioned, but these should be enough to get you started. Let us know what’s your favorite foods beginning with the letter S in the comment below. 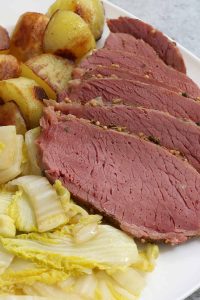 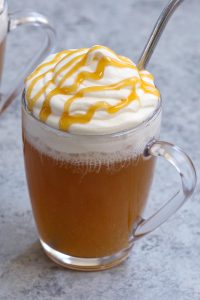 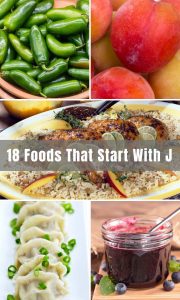 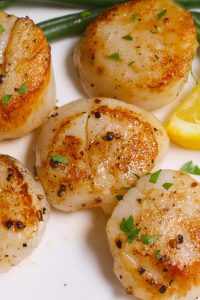 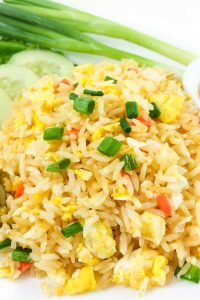 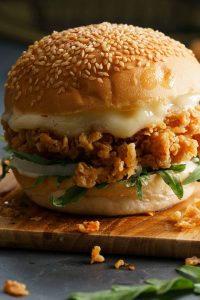