Yellowtail Sashimi made with delicious and buttery Hamachi fish! It’s so much cheaper than the Japanese restaurants, and incredibly easy to make at home. I’ll share with you how to cut yellowtail for sashimi, and make both the traditional and Nobu new style sashimi.

When it comes to Japanese sashimi, Salmon Sashimi, Tuna Sashimi, Swordfish Sashimi, and this melt-in-your-mouth yellowtail Hamachi sashimi are my favorites.

I like the traditional way to eat yellowtail sashimi by dipping the raw fish into soy sauce infused with wasabi. Recently I also discovered the Nobu style sashimi, where the raw fish is gently “cooked” when the hot oil and sauce are poured on top. If you don’t like the idea of eating raw fish, you can definitely try this method. I’ll show you how to make both traditional and nobu style sashimi in this post.

You’ll need a sharp knife to cut the fish properly and easily. There are two kinds of knives that are great for cutting fish for sashimi: the slicer (Sujihiki) and the multi-purpose chef’s knife (Gyuto).

How to Make Classic Yellowtail Sashimi

For making sashimi dish, there are two slicing techniques you can use. You can slice the fish straight down to form relatively thicker pieces. This is called hirazukuri, which is usually used in making traditional yellowtail sashimi.

Alternatively, you can cut at an angle to form thinner slices. This is called usuzukuri, which can be used in making both traditional and nobu-style sashimi. You can adjust the angle to get the proper length and thickness.

If you are a fan of Nobu style, I’ll show you how to make this into Nobuyuki yellowtail sashimi. For those who don’t know, Nobu (Nobuyuki Matsuhisa) is a Japanese celebrity chef who is known for blending Japanese dishes with Peruvian ingredients.

To make Nobu new style sashimi, you’ll need to cut the fish into paper-thin slices, and then lay them flat on the plate, overlapping as little as possible. Add sliced jalapeno on top. Then in a saucepan over medium heat, add olive oil, sesame oil, minced garlic, and soy sauce. Bring to a boil and pour the sauce over the yellowtail sashimi. The hot sauce will “cook” the fish slightly, making a unique dish that’s completely memorable!

What is Yellowtail Sashimi?

Yellowtail sashimi tastes smooth and buttery. When eaten with soy sauce and wasabi, it has a desirable bold flavor with a savory and spicy flavor.

What is the Best Yellowtail Fish for Sashimi?

This recipe calls for raw yellowtail Hamachi, and you’ll need to buy sashimi-grade fish. The yellowtail is a great option for sashimi with its high fat content and oily texture. Buy the belly of this fish if you can as it tastes the best. Usually you can find it at your local Japanese grocery stores or large supermarket. It can be fresh or frozen. Place the fish on ice before cooking, and it’s best to eat it the same day.

Is Yellowtail A Tuna?

No, yellowtail fish is not tuna, as many people think. It refers to Japanese amberjack, a delicious fish that lives between Japan and Hawaii.

What’s the Difference Between Sashimi, Nigiri, and Sushi?

Sashimi refers to just slices of raw fish, often served over shredded daikon radish, and it doesn’t have rice. While nigiri is a type of sushi, which consists of raw fish sliced served over pressed vinegar rice.

How Many Calories in Yellowtail Sashimi?

A 1-oz serving of yellowtail sashimi has about 28 calories.

What to Serve with Yellowtail Sashimi?

Yellowtail sashimi is often served with soy sauce and wasabi paste. For the nobu-style sashimi, the raw fish is often topped with jalapeno, other sliced chilies, grated fresh garlic and ginger.

If You Love This Recipe Try out These Japanese Recipes:

I hope you like this recipe. If you try it, please comment below and let me know how your Yellowtail Sashimi turns out! 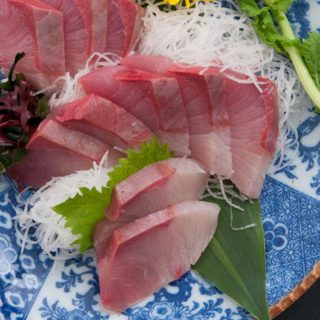