Blove’s Sauce is a seafood sauce seasoning mix that’s loaded with spices. It’s invented by a Youtuber Blove, known for doing Mukbang – videos where creators eat large amounts of food with a live audience. The sauce soon became so popular that it’s selling on Amazon as Bloves Smackalicious Sauce (mild or spicy). We’ll share with you how to make this delicious sauce recipe at home from scratch.

This Smackalicious sauce is meant to go along with a seafood boil, similar to what you might get at a seafood restaurant, where they hand you a bag full of crustaceans in a savory sauce. In the Mukbang world, it’s used as more of a dip. Creators prepare their food, usually consisting of shrimp, snow crab, potatoes, and corn, then dip it into a giant bowl of the sauce.

But there are actually a ton of ways you can incorporate the sauce. By making this recipe yourself, you can not only play around with the spices to make your perfect custom ratios, but you can also experiment with the different uses below. In fact, some of the recipe variations we’ll show you were given to Blove by her viewers. Whether you want to go all out and have a seafood boil at home, or you’re just looking for a new sauce to add to your classic dinners, this sauce is going to change your seafood game.

At its core, this sauce is really just a butter sauce. But Blove created a combination of 10 different spices, as well as a few other seasonings, to create a spicy sauce that’s bursting with flavor. It’s a relatively simple way to elevate your standard boiled seafood.

How to Make Blove’s Sauce

1. Combine all the seasoning ingredients in a mixing bowl. Set it aside.

3. Melt butter in a large skillet over medium-low heat.

4. Add garlic and onion chunks to the skillet. Turn the heat to medium, and cook for about 30 seconds, stirring constantly.

6. Add the seasoning mix and bring it to a boil. Stir occasionally until the mixture is well mixed. Remove from heat, and let the sauce cool down. Serve and enjoy!

The sauce is quite spicy without the optional ingredients. So make sure to taste the sauce before adding any additional spicy ingredients.

There are so many ways to use Blove sauce. For its true purpose, use it either as a dip with already boiled seafood, or toss it in oven bags along with your seafood and use it as the boiling liquid. Blove herself has made videos on her channel dipping cucumbers into the sauce, while viewers have commented about using it as the base for seafood pasta.

It’s really just a heavily spiced butter sauce, so you can swap it in any recipe where you might use a simpler one. A Blove fan even mentioned they prefer it on the steak to seafood.

This sauce is super rich and loaded with spice. Its heat can be adjusted to your preference, but whether mild or super spicy, it’s still loaded with flavor.

If stored properly in an airtight container, this seafood sauce will last for 2 weeks. For optimal freshness, you can also make the spice mixture ahead and just add the fresh ingredients when you’re ready to enjoy.

Where Can I Buy Blove Sauce?

After her video went viral, Blove created a seasoning pack that quickly became a bestseller on Amazon. She eventually introduced a spicy version as well. There is no bottled version of the sauce, but this seasoning mix lends to a variety of uses on top of creating its signature sauce. The mixture is also available in-store at some Walmarts, Whole Foods and Targets.

If you tried this recipe, let me know how your Blove’s Sauce turns out in the comments below! 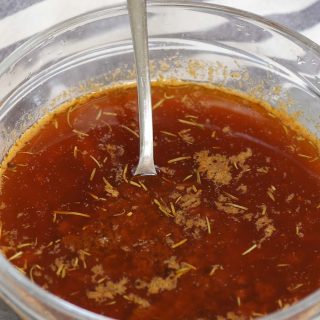