Have you ever wondered what’s in the delicious sauce that comes with your sushi order? It’s probably Tobiko sauce and it’s easy to make at home! Try this Tobiko sauce recipe the next time you’re serving a Japanese-inspired dish at home.

What Is Tobiko Sauce?

Tobiko is a simple creamy sauce that’s typically served with sushi and seafood dishes at Japanese restaurants. It’s made with mayonnaise, sriracha sauce and tobiko, a type of fish roe.

How to Make Tobiko Sauce

Yes. Tobiko is a type of fish roe. Fish roe is also known as fish eggs.

What Do You Eat Tobiko With?

Tobiko is often served as a topping for sushi and seafood. It’s also used to garnish crab cakes and is delicious served alongside cheese and crackers, salads, and egg dishes.

The tobiko has a salty taste that’s also slightly smoky. It has a pleasant crunchy texture. When tobiko is blended with mayonnaise, sriracha sauce and mustard, you’ll have tobiko sauce – a creamy and spicy sauce that pairs well with sushi and seafood. If you’re a fan of creamy pasta dishes, try adding cream and butter to tobiko sauce and tossing it with pasta.

Ways to Use Tobiko Sauce

Tobiko sauce is delicious served with sushi. Here are some additional ways to enjoy it:

How To Store Tobiko Sauce

Tobiko sauce should be refrigerated in an airtight container. It will last in the fridge for 3 to 6 days. 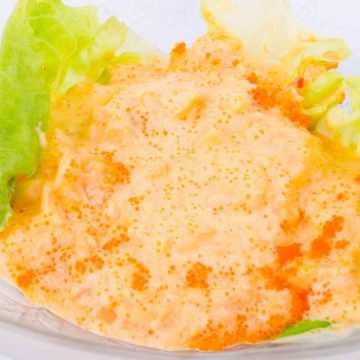