Cinnamon Toast Crunch Shot is an adult version of your favorite childhood cereal, in shot form. The base of this delicious alcoholic drink is RumChata and Fireball Whiskey, served in shot glasses rimmed with crushed cinnamon toast cereal. Sweet, boozy, and creamy with a nice cinnamon flavor!

This cinnamon toast shot is one of my go-to shot recipes, along with Lemon Drop Shot!

Believe it or not, when you combine Rumchata and Fireball Whiskey, it tastes just like cinnamon toast crunch cereal with milk! It’s perfectly smooth, sweet, boozy and creamy with a right amount of cinnamon. Enjoy this treat in a shot glass, or over ice as a tasty dessert cocktail! Great for Happy Hours, after dinner or late evenings.

Table of Contents Show
What you’ll need for this recipe
How to make cinnamon toast crunch shot
RumChata to Fireball Ratio
Cinnamon toast crunch pudding shot
Frequently Asked Questions
What are some other drinks you can make with Fireball?
What else is good to mix with RumChata?
If you love this recipe try these out:
Cinnamon Toast Crunch Shot Recipe

What you’ll need for this recipe

RumChata: I love RumChata as it’s one of the best-tasting cream liquor. Made with Caribbean Rum and real dairy cream, it’s smooth and creamy with a perfect amount of cinnamon flavor.

Fireball Whiskey: Fireball is a classic choice for this recipe as it has cinnamon flavoring and sweeteners.

Simple Syrup: We use syrup to wet the shot glass so it’ll be sticky. You can use store-bought version or make your own by bringing equal parts sugar and water to a boil in a pot. Stir until the sugar has completely dissolved. Remove from the heat and let it chill.

Storage tip: There’s no need to refrigerate RumChata or whiskey, whether it’s sealed or already opened.  Keep them tightly closed and store in a cool, dark area. The ideal storage temp is between 50-75°F (10-24°C) , so a cabinet in the pantry or kitchen is all you need.

Traditionally cinnamon toast crunch shot has equal parts of RumChata and Fireball whiskey, and I love my shot with this 1:1 ratio. You can adjust the ratio to your own preference.

Pro tip: The color of your drink becomes darker and the flavor gets sweeter as you increase the amount of Fireball whiskey.

A fun twist to this recipe is to make it into cinnamon toast crunch pudding shot. Just add vanilla pudding mix, milk, RumChata and Fireball to a bowl and mix together. Pour into shot glasses and refrigerate for 2 hours.

What are some other drinks you can make with Fireball?

What else is good to mix with RumChata?

If you love this recipe try these out:

Please let me know how your cinnamon toast crunch shot turns out in the comments below! 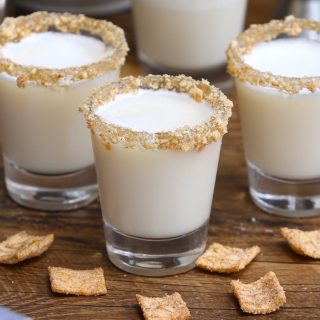