This copycat Chipotle Fajita Veggies dish is healthy, colorful, and loaded with caramelized onions and crispy bell peppers. It tastes just like the one from the Chipotle restaurant! It couldn’t be easier to recreate this simple grilled recipe at home with just 5 ingredients.

These vegetables are delicious with just some salt and dried oregano, but you can add some heat with cayenne pepper or chili powder if you prefer.

I love to serve them with Fried Rice, Flour Tortillas, Burritos, or Tacos.

What Are the Fajita Veggies at Chipotle?

At Chipotle, veggies are cooked to crispy perfection and served sizzling hot in a cast-iron skillet. Oregano and salt are the two simple seasonings used to bring out the flavor of colorful bell peppers and savory onions.

How to Make Chipotle Fajita Veggies

1. In a large non-stick skillet over medium-high heat, heat oil until it’s shimmering and VERY HOT.

3. Cook for about 5 minutes. Stir occasionally.

4. Season with oregano and salt to taste. Stir and cook for about 2 more minutes until the veggies are slightly softened but still look bright.

When it comes to Fajita Veggies, less is more. Oregano and salt are really all you need to bring out the taste of the veggies. Adding too many seasonings can be overbearing for this recipe. If you’d like a spicier dish, add cayenne or chili peppers. If you’ll be adding a protein like chicken or shrimp, season with a Fajita seasoning mix. Make your own by combining chili powder, cumin, paprika, salt, sugar, garlic powder, onion powder, and cayenne pepper.

These veggies are pretty mild in comparison to some of Chipotle’s other offerings. Fajita veggies are seasoned with salt and oregano for lots of flavors, but not much spice. If you’d prefer some heat, go ahead and add cayenne or chili peppers to the skillet.

What to Use Instead of Bell Peppers in Fajitas?

If you’d prefer not to use bell peppers for your Chipotle Veggie Fajitas, there are several alternatives to try. This simple recipe also works well with sliced Portobello mushrooms, cauliflower, zucchini or chopped tomatoes.

What are the Chipotle Toppings for Fajita Veggies?

Chipotle Fajita Veggies are even better with toppings! Make it a complete meal by adding classic Mexican favorites like shredded cheese, salsa, guacamole, refried beans, or sour cream. Wrap it all up in a flour or corn tortilla for a flavorful and simple weeknight dinner you’ll love.

Prefer not to fry? Oven-roasted Fajita Veggies are crispy, tender, and require a lot less oil.  Begin by preheating the oven to 400 F degrees. Toss your veggies in a tablespoon of olive oil, along with salt and dried oregano. Put your veggies in a single layer on a lined sheet pan and roast for 25 minutes.

Fire up the grill for that smoky Fajita taste. Use a skewer to hold cubed pieces of onions, bell peppers and tomatoes tossed in olive oil and seasonings. Put the skewers on the grill for ten minutes on each side. You can either serve your Fajita veggies on the skewers or remove them for use in tacos or other dishes.

Juicy chunks of seasoned chicken are the perfect protein to have with your veggie fajitas. Cut skinless, boneless chicken breasts or thighs into thin strips and toss in olive oil and your favorite Fajita seasoning. Bake for 25 minutes at 425 F degrees.

I hope you like this recipe. If you try it, please comment below and let me know how your Chipotle Fajita Veggies turn out! 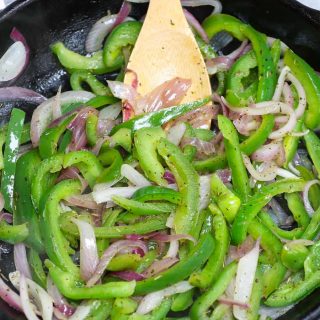