The Amber Moon is an American drink that has been around for a long time. Made with whiskey (or vodka), raw egg, and Tabasco, this cocktail was considered a “miner’s breakfast” in old days. Whether it’s an effective treatment for a hangover is controversial.

What is Amber Moon?

The origins of Amber Moon are unknown, but it has been around since the 1800s.  This drink is made with 3 ingredients and packed with proteins with minimal calories. It’s believed that eating raw eggs can soothe the burning sensation after drinking whiskey and Tabasco. It was considered to be a healthy drink that can cure a hangover, although the scientific study hasn’t found any evidence.

Amber moon drink has appeared in several popular shows such as Cowboy Bebop and The murder of the Orient Express, where the Amber Moon was served as a breakfast drink to the man before he died.

This drink is very controversial, while some people think it’s absolutely disgusting, others love it and consider it beneficial for fitness reasons, similar to the idea of drinking prairie oyster.

What you’ll need for this recipe

Whiskey (or Vodka): I recommend using the whiskey that has a smoother flavor, such as Irish whiskey. You can also substitute vodka for this recipe.

Raw Egg: It’s best to use freshest eggs for this recipe to create that foamy and soothing sensation.

Tabasco: Traditional Amber Moon recipe uses Tabasco sauce, which adds heat to this drink. You can use other hot sauce for substitution.

Whiskey or Vodka Storage Tip: There’s no need to refrigerate or freeze whiskey or vodka whether it’s sealed or already opened.  Keep them tightly closed and store in a cool, dark area. The ideal storage temp is between 50-75°F (10-24°C), so a cabinet in the pantry or kitchen is all you need.

How to make an Amber Moon

1. Crack a raw egg into a glass very carefully so you don’t break the yolk.

2. Add in whiskey or vodka very slowly into the glass.

3. Then add Tabasco into the glass, or serve it on the side.  You can add more or less Tabasco depending on how much heat you’d like to add to your drink.

4. The drink is ready to be served. If you prefer to mix the whiskey and tabasco, you can gently stir the drink, but make sure the yolk remains unbroken and doesn’t get mixed with the liquid.

How to serve Amber Moon cocktail?

Traditionally Amber Moon is served in a highball glass directly at room temperature for breakfast. For a more adventurous experience, you can blend the ingredients together. 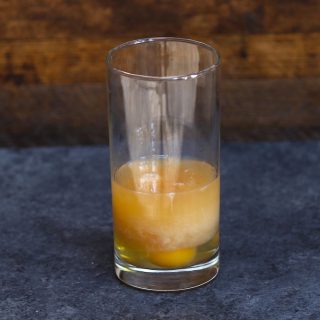 The Amber Moon is an American drink that has been around for a long time. Made with whiskey (or vodka), raw egg, and Tabasco, this cocktail used to be considered a “miner’s breakfast” in old days. Whether it’s an effective treatment for a hangover is controversial.
Print Pin Rate
Prep Time: 2 minutes
Total Time: 2 minutes
Servings: 1 Drink
Author: Izzy
Calories: 271kcal