If you’ve never cooked bone-in ham on your own, there’s no need to worry! Cooking a ham is a lot easier than it seems, from cooking times to temperatures, we’re here to help you with any questions you may have about bone-in ham.

Hams are a holiday staple in many households, but they’re also a great meal all year round! While it’s easy to grab sliced ham from the deli at your grocery store, cooking your own ham at home will give you the best-tasting results. If you’re looking to cook a bone-in ham, then this is the article for you!

If you’ve ever wondered what the term “ham” means, you’re not alone! Ham is a cut of meat from the leg of a pig that is often cured, smoked or baked. When it’s cooked right, ham is juicy, tender and full of flavor! Among the many different types of ham out there, we recommend bone-in ham for its delicious flavor and texture.

Which is Better: Bone-in or Bone-out Ham?

This depends on how much work you’re willing to put in! Bone-out hams are usually easier to cook and carve because the bones were removed before the ham was processed. Sadly, bone-out hams are often preserved with water and salt, which affects the texture of the meat and makes it less flavorful. In contrast, bone-in hams are undeniably more flavorful and have a better texture, but they need more effort to carve.

Is a Bone-in Ham Already Cooked?

Most hams that you purchase from the store will already be fully cooked. When purchasing your ham, check to see if the package says things like pre-cooked, fully cooked, cured or baked. If you see any of these words, then your ham most likely just needs to be reheated.

What is the Best Way to Cook a Bone-in Ham

The most common way to cook a bone-in ham is in an oven, this method requires little supervision and makes sure that the meat is being heated evenly. If you’re looking for an alternative way to cook your bone-in ham, grilling is a great option. Grilling your ham is similar to using an oven, simply place the ham in a pan and cook using indirect heat.

If you want a flavorful and juicy ham, then glazing is the way to go. Glazing is a cooking technique that pours or brushes a coating over your dish to enhance the flavor and keep it moist. There are lots of popular glazing ingredients for ham such as brown sugar, honey, and even bourbon. You’ll want to glaze your ham before putting it in the oven and then apply a second layer 30 minutes before your ham is done.

TIP: Scoring the meat with perpendicular cuts before cooking is really important when making glazed ham, it helps the flavor seep deeply into the meat!

How Long to Cook a Bone-in Ham

What Temperature Do You Cook a Bone-in Ham?

Whether your ham is uncooked or fully cooked, the perfect temperature for cooking your bone-in ham is 325°F. This low temperature will heat the ham without cooking off all the moisture inside of it. Always check the internal temperature of the ham before removing it from the oven, it should be 145°F throughout the meat!

How to Cook Bone-in Ham

Tips for the Best Bone-in Ham

Do You Cover the Bone-in Ham While Cooking?

To keep the meat nice and moist, you should always cover your bone-in ham with foil before cooking. If you don’t, the moisture in the ham will begin to evaporate as it heats up and you’ll be left with dry ham. Be sure to loosely cover the ham with tin foil so the air in your oven can circulate properly.

TIP: You can put a small amount of water or wine in the bottom of the pan to keep your ham nice and moist!

How to Carve a Bone-in Ham

The first things you’ll need to carve up your ham are a large cutting board, a carving fork and a long, thin blade. Once your ham is on the cutting board, look for the bone and begin cutting off a few slices parallel to the bone. This will give you a flat spot that you can rest on the cutting board for easier cutting. Now begin cutting slices perpendicular to the bone until your ham is sliced almost down to the bone. For the final step, position your knife underneath the bone and slice parallel across, your perpendicular slices should release easily from the bone.

What to Serve with Ham

There are so many sides that complement a juicy ham, but here are some of our favorites! Potatoes are a classic and easy side dish, you can serve your ham with mashed potatoes, scalloped potatoes, or any of your other favorite potato dishes. Another dish that combines great with the flavor of ham is glazed carrots. They’re easy to make, super delicious and good for your health! 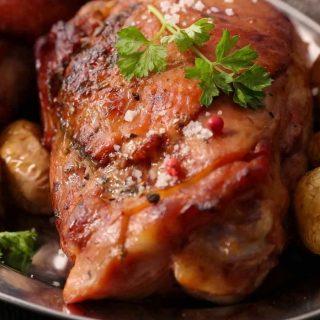 If you’ve never cooked bone-in ham on your own, there’s no need to worry! Cooking a ham is a lot easier than it seems, from cooking times to temperatures, we’re here to help you with any questions you may have about bone-in ham.
Print Pin Rate
Servings: 22
Author: Izzy