Although Kanikama is called crack sticks and tastes like real crab, it doesn’t contain any crab flesh. You’ve probably eaten kanikama – even if you didn’t realize it. It’s the sticks of fake crab meat that are often used in the popular California roll.

What is Kanikama (imitation crab)?

Also called imitation crab, kanikama is used as a crab substitute and made from surimi, which is a fish paste. The fish is first deboned and minced to make a paste, then it’s flavored, colored and reformed into flakes, sticks or other shapes.

Kanikama usually contains no crab, except a tiny amount of crab extract to create the flavor. Pollock is the most popular fish that’s used to make surimi. The history goes back to 1974 when a Japanese company Sugiyo first produced and patented imitation crab meat.

Kanikama is formulated to have a similar flavor and texture to real cooked crab. It’s mild with slightly sweet flavor and low in fat.

Compared to real crab, kanikama also has lower nutrients such as protein, omega-3 fats, vitamin, zinc and selenium. Although imitation crab is low in fat, sodium, and cholesterol, it’s viewed as a less healthy option than the real crab.

What is Kanikama made of?

The main ingredient in kanikama is the fish paste surimi, which is often made from inexpensive whitefish (such as Alaskan pollock) with fillers and flavorings like starch, sugar, egg whites, and crab flavoring. Red food coloring is also used to mimic the look of real crab.

In the US, you can find kanikama in the refrigerated or frozen section at local Japanese or Asian grocery stores. Alternatively, you can order them online from amazon.

Kanikama or imitation crab is precooked, and you can use it straight from the package. There are several types based on the shape:

Tips for Cooking with Kanikama

Kanikama tastes best when it’s not further cooked, as heating it too much destroys the taste and texture.

One of the most popular uses is as the filling in California sushi rolls (see the photo below). It can also be used in nigiri sushi. However, it can still be used as an ingredient in cooked dishes and I recommend adding it in the final stage to minimize the cooking process.

Is kanikama raw or cooked?

Kanikma is the fish mixture formed into shapes, and then cooked by steam, which also pasteurizes them. It’s sold fully cooked, and can be served as is or used in sushi.

What fish is used in kanikama?

It’s made from a paste of minced inexpensive white fish such as pollock, bream, and whiting.

Is kanikama bad for you?

Kanikama is a highly processed food which is less nutritious with some questionable additives. As the imitation crab is much cheaper, it’s an alternative when you don’t have budget for real crab when you’re making a meal for a special occasion. However, it’s best to minimize your intake of processed food as it’s hard to know exactly what binding ingredients are used.

No. As wheat starch is often used in the paste, kanikama is not gluten-free.

How to store it? 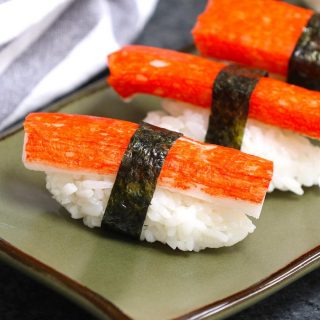