Shirako is a Japanese delicacy that’s rich, slightly fishy, and creamy. For adventurous eaters and sushi enthusiasts, shikaro is something to try at least once. Also known as milt, it’s the semen of certain fish such as cod and salmon. It’s often quickly heated and served with ponzu sauce.

What is Shirako / Milt?

Shirako is the milt, or sperm sacs of male fish. In Japan, milt is most commonly harvested from codfish. However, shirako can also be extracted from other fish such as salmon, tuna, or pufferfish. Shirako may be translucent or opaque and varies in color from white to light pink. Shirako can be eaten raw or cooked and is full of protein and B vitamins. The Japanese believe that Shirako has anti-aging properties.

What is Shirako Made of?

Shirako is made of the sperm sacs and seminal fluid of male fish. The sacs are tube-like in shape with a soft texture. Sometimes, shirako is harvested from other types of fish such as salmon or anglerfish.

Why Do People Eat Shirako?

Shirako is considered a delicacy in Japan and in many other places around the world. Many cultures consume some type of milt. Though it may be an acquired taste, shirako is a versatile protein that can be made in a variety of ways. It may be eaten raw, steamed or fried, whether on its own or as a component of nigiri or maki sushi. It can also be enjoyed tempura-style or yakimono style.

What is Shirako Ponzu?

This is perhaps the most traditional way to prepare shirako. Raw shirako is quickly heated and then drizzled with ponzu sauce .

Shirako is sometimes compared to oyster in its taste, though it is a lot milder than oyster. It has a salty, slightly fishy taste and when raw, has a creamy, custard-like texture. Some find it to be slightly sweet, with a buttery flavour. It’ll change texture when cooked, becoming much firmer.

Where Is Shirako Found?

It’s easiest to harvest during the months of December to February. Check fish markets, fishmongers and specialty seafood stores. Japanese restaurants are more likely to have shirako on the menu during the winter months due to its availability. 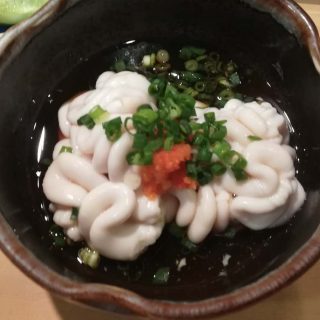