Oyster sauce is a popular condiment in Asian cuisine, commonly used in chow mein or stir-fry dishes. But what if you don’t have oyster sauce and really want to make a delicious recipe that calls for oyster sauce? Every home cook needs to know some oyster sauce substitutes in their back pocket.

As the name suggests, the base of this sauce is cooked oysters. It is said that the sauce was accidentally invented by a Chinese oyster cook who lost track of time and uncovered his pot to reveal a thick brown sauce. Upon realizing the intensely delicious flavor he began selling his sauce and it quickly spread all over the world.

Though it’s traditionally made by slowly simmering oysters in water, many shortcuts are taken in modern bottled oyster sauces. Most oyster sauces sold today are made with a base of sugar and salt, with oyster extracts or essences being added to add flavor. Often, soy sauce is added to increase the umami flavor that is typical of this sauce.

What Is Oyster Sauce?

Traditionally, oyster sauce is the reduction produced when oysters are slowly simmered in water. The juices of the oyster are caramelized, becoming thick, dark and sweet. Soy sauce and sugar are usually added to stretch the sauce and improve flavor. Modern bottled oyster sauces are made with oyster extracts or essences. Though they contain less oysters than traditional sauces, the flavor is quite similar. This method of production also helps to reduce costs for consumers and improve the shelf life of the sauce.

This thick, dark sauce is commonly used as a dipping sauce or a glaze for various meats. Due to its consistency and flavor, it is a best substitute for oyster sauce.

This common ingredient is a staple in Asian cuisine. Made from fermented soybeans, soy sauce has the same rich umami taste as the oyster sauce.

This syrupy Indonesian sauce is made by combining soy sauce with sugar. The thick, dark, sweet sauce is a great substitute for oyster sauce. You can find it at many Asian grocery stores or order online from Amazon.

This sauce hails from Japan and is popularly used in seafood and meat dishes such as Teriyaki Chicken Bowls. Made with soy sauce, brown sugar and garlic, teriyaki is similar in taste and consistency to oyster sauce.

This distinctive sauce is a popular ingredient in Thai cuisine. The briny, savory taste is reminiscent of the sea, just like with oyster sauce.

What Can I Use Instead of Oyster Sauce in Stir Fry?

Oyster sauce is a delicious addition to any stir fry because it’s rich umami flavor. But there are many reasons why you may need a substitute. Perhaps you are allergic to oysters or are unable to find oyster sauce. In that case, there are many options that yield similar results. Soy sauce, hoisin sauce and fish sauce are all excellent alternatives.

Is Hoisin Sauce the Same as Oyster Sauce?

Though they are similar in taste and appearance, hoisin sauce is not the same as the oyster sauce. Hoisin sauce does not contain oysters, but is instead made with a mixture of soybeans and spices. Quite often, hoisin sauce will have hints of onion and red chili peppers. Both sauces are popularly used in Asian cuisine, whether in stir-fries or for flavoring meat.

How to Make Oyster Sauce?

It’s quite easy to make your very own oyster sauce from scratch. This will give you an authentic taste with fewer preservatives. For this shortcut version, you will need 40ml of soy sauce, combined with 25ml of the liquid from canned oysters. Simmer on low heat for ten minutes, while dissolving a teaspoon of brown sugar into the mix.

Can I Substitute Oyster Sauce for Teriyaki Sauce?

Both oyster sauce and teriyaki sauce are similar in consistency, though the taste is a bit different. Teriyaki is much sweeter, while oyster sauce has a briny undertone. In a pinch, they may be used interchangeably. However, you may add some of the liquid from canned oysters to teriyaki sauce for a more authentic oyster taste.

Vegetarians will not be able to consume oyster sauce due to the presence of oysters. Shiitake mushrooms and soy sauce may be used to create a thick sauce that has a similar briny, umami taste. Alternatively, vegetarians may wish to pick up a bottle of hoisin sauce from the grocery store. Hoisin sauce is an excellent substitute and contains no seafood or other animal product. 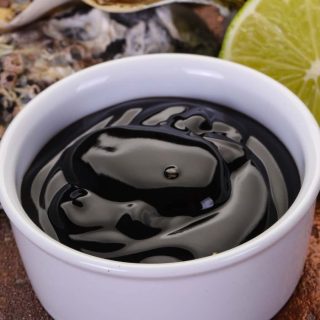