The cooking methods for chow mein and lo mein differ slightly. Chow mein noodles are softened in hot water and then stir-fried. Lo mein noodles are completely cooked before getting mixed in with the meat, vegetables and sauce.

The wok method provides both noodle dishes with an incredible taste. To make chow mein noodles, you use a small amount of oil in a hot work and lightly fry. For the lo mein, the noodles are cooked beforehand and then tossed in the wok with the rest of the ingredients.

Chow mein uses a delicate sauce that is light or uses none at all. Lo mein is a dish that requires a more rich sauce for its flavor.

When looking at the nutritional value of both of these dishes, lo mein wins! This is simply because chow mein is fried, causing a higher fat count. However, both Lo Mein and Chow Mein provide a source of fat, carbs, and proteins.

What is Chow Mein?

Chow, meaning fried, or in this case fried noodles – is one of the more popular dishes in Chinese restaurants and take-outs around the world.

Also commonly known as twice-browned noodles, chow mein involves frying the noodles until they turn brown. However, you can also enjoy chow mein steamed or fried.

The crisped version of chow mein has a thick sauce that turns the dish brown, whereas the steam is simply mixed with soy sauce.

There are two main types of chow mein dishes:

In both types, the noodles are the main focus of the dish. All of the extra vegetables, sauce and meats are kept to a minimum in order to not take away from the noodles. These additives are only placed on the noodles after the noodles have been boiled and fried in oil. This ultimately allows the chef to make the noodles the star of the show!

Typically in the U.S., Chow mein is stir-fried and contains meat such as chicken, pork, or beef and onions, and celery.

If you’re a vegan or vegetarian, then substituting the meat with shrimp or tofu is perfectly acceptable. In fact, eating vegetarian chow mein is becoming more and more popular.

However, crispy chow mein often contains more onion and celery than traditional chow mein and is served strained. Whereas steamed is served with different vegetables that also include onions, carrots, celery, cabbage and mung bean sprouts.

What is Lo Mein?

Lo mein on the other hand differs a bit. It’s a dish that focuses on tossed or mixed noodles. The term Lo is Cantonese, which means stirred noodles, but in Mandarin, the dish is called lāo miàn.

Lo Mein usually contains vegetables, meat and boiled noodles that are tossed with a sauce. The vegetarian dish will typically just have vegetables. This makes the low mein dish a variation of the traditional noodle soup. Oftentimes, the chef will drown this dish in a savory sauce to mimic soup. These cooked noodles are added to a wok containing various vegetables and proteins that have already been cooked and tossed in the lo mein sauce.

Lo mein is a popular dish in the US, and is often confused with Chow Mein.

American-Chinese Lo Mein differs from the traditional Cantonese Lo Mein. More specifically, in the U.S. the noodles are stir-fried with seasonings and soy sauce along with vegetables such as bok choy and cabbage, and a protein such as beef, chicken or pork.

Often cooked al dente, lo mein noodles are often soft. The noodles used are egg noodles, which can be found in the fresh section of the grocery store.

Chow Mein vs Lo Mein: Which Is Better?

The choice is yours here! It’s simply about personal taste. Some prefer the crunch of the dried egg noodles in chow mein, whereas some prefer the chewiness in lo mein.

This Shrimp Chow Mein is loaded with shrimp and vegetables that are stir fried with noodles and a flavorful sauce. This Chinese dish is an easy to prepare in just 20 minutes!

This Beef Chow Mein is a quick and easy one pot meal loaded with tender beef, flavorful vegetables and fried noodles. It comes together in just 20 minutes for a delicious weeknight dinner the entire family will love.

This Chicken Chow Mein is an easy one pan meal that comes together in 20 minutes and is loaded with juicy chicken, flavorful vegetables and fried noodles. So skip the takeout and make this restaurant-quality dish for a quick weeknight dinner the whole family will love.

Garlic Beef Lo Mein combines tender beef with noodles and vegetables in a homemade lo mein sauce. This beef lo mein recipe is ready in just 20 minutes for a delicious weeknight dinner that’s so much better than takeout.

This easy Chicken Lo Mein will become one of your go-to recipes for stir-fried noodles. It’s so much better than takeout and only takes 20 minutes to prepare for a quick weeknight dinner!

This Garlic Shrimp Lo Mein is loaded with succulent shrimp, fresh vegetables and lo mein noodles. It comes together in about 20 minutes and is so much better than takeout. Simple, fast and delicious! 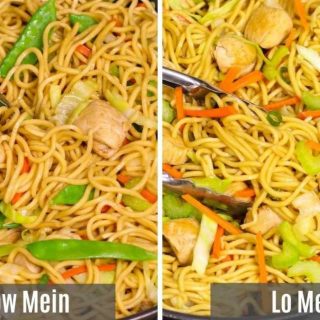 Have you ever wondered what the difference between chow mein and lo mein is? Many people often think that the only way these two dishes contrast is with noodles that are used. While this is true, the other contributing difference is the way that they are cooked.
Print Pin Rate
Prep Time: 20 minutes
Cook Time: 20 minutes
Total Time: 40 minutes
Servings: 4
Author: Izzy