Hormigas Culonas are large leaf-cutter ants that have been a popular delicacy in Santander, Colombia. These edible insects are usually female with another name “big-bottomed ants”. Harvested in springtime, hormigas culonas are often fried or roasted with salt, and then served in small containers or bags as a snack.

What are hormigas culonas?

Also called Atta Laevigata, hormigas culonas is Spanish for the flat-butted ant. This species is one of the largest leafcutter ants, recognized by the smooth and shining head. Hormigas culonas are a good source of protein and low in saturated fat.

They’re harvested during rainy season in April and May. There are only a few weeks a year that’s best to collect them.

Where to find hormigas culonas?

This ant species is often found in Colombia, more specifically in Santander region. They are sold in the street, fried or roasted, and are not cheap. You can also find them in restaurant like this in Barichara, known for its delicious hormigas culonas.

Local Colombian have been eaten hormigas culonas for hundreds of years, as a tradition inherited from pre-Colombian cultures.

As a snack, it’s often sold on street corners, toasted with salt or made with the addition of wine. In some upscale restaurants, these giant ants are made into gourmet dishes served at lunch or dinner.

Note: Some restaurants have a more creative way to cook this insect by garnishing filet mignon with toasted hormigas culonas in the sauce.

Hormigas culonas are crunchy, salty, and taste a little like crispy peanuts. 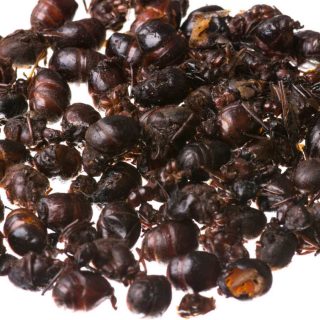