Apples, oranges, and bananas are delicious but have you tried tropical fruits like dragon fruit or guava?

In today’s article we’ll introduce you to 14 popular tropical fruits that will have your tastebuds dancing!

Jackfruit is also known as the jack tree. It’s originally from Southwest Asia and is commonly found in countries including Brazil and Africa. Jackfruit has a thick green bumpy skin and the flesh is light yellow in color with plump bulbs. The flesh of jackfruit is sweet but has a strong, unpleasant odor. Because of its meaty texture, jackfruit is often used as a meat alternative in vegan and vegetarian dishes.

Sweet and tart pineapple is originally from South America and is grown in many regions of the world including Brazil, Asia, Africa, Mexico, Australia, and Central America. Pineapple is often used in savory dishes, baked goods, and cocktails. Pineapple is easy to source and is sold fresh, frozen, canned, and juiced.

Mango is an oblong-shaped fruit with a tough, thin skin that can be red and green or yellow. The color of the flesh ranges from yellow to deep orange. When ripe, mango is juicy and sweet with a pleasant floral scent. The texture of the flesh is slightly fibrous and the flavor is described as a combination of orange and pineapple with tart and floral notes. Mango is believed to have originated in the region between northwestern Myanmar, Bangladesh, and northern India. Mango is often added to savory dishes, baked goods, smoothies, and ice creams.

Also known as pawpaw and papaw, papaya is a large fruit with flesh ranging in color from deep yellow to pinkish orange. The skin is typically greenish yellow. The center of the fruit holds a collection of black seeds. The flavor of papaya is described as a combination of cantaloupe and mango and the texture is soft and buttery. Papaya is grown in the areas that include Mexico and Central America. Papayas can be eaten fresh, and are often added to smoothies, fruit platters, salsas, salads, and juiced.

Lychee is originally from Southeast Asia and has a bumpy reddish skin and creamy white flesh. A large, smooth, dark colored seed can be found in the center of the fruit. Lychee is typically eaten fresh but can also be dried or canned. Lychee has a sweet flavor that’s similar to pear and strawberry with a hint of citrus, and has a jelly-like flesh. Lychee is often added to fruit salads, jams, and juices.

Passion fruit has a reddish purple or yellow skin and loose, jelly-like orange or green pulp with small edible black seeds. Originally from southern Brazil and northern Argentina, it has a tart, citrusy, and refreshing flavor. Passion fruit is often added to dairy products, yogurt, salads, drinks, and baked goods.

Guava has a yellowish green skin and flesh that ranges from creamy white to deep pink. It’s native to the Caribbean, Central America, Mexico and northern areas of South America. Guava has a sweet, pleasant flavor that’s described as a combination of strawberry and pear. It’s often added to fruit salads and transformed into sweet jams and jellies.

Also known as salak, snake fruit is native to Indonesia and grown in Southeast Asia. The skin is brown and scaly similar to snake skin and the flesh is creamy colored and firm like an apple. Snake fruit is typically eaten raw and can also be pickled, juiced, canned, dried, candied, fried, and boiled into a sweet syrup.

Breadfruit is more similar to a vegetable than what we know as fruit. It has tough skin that ranges in color from greenish-yellow to mainly green. Breadfruit cannot be eaten raw and has a texture similar to potato or baked bread when cooked. Breadfruit is typically prepared steamed, fried, or roasted and can be found in regions including Central and South America, Africa, the Caribbean, and Southeast Asia.

Also known as cherimoya, custard apple is originally from the mountains of South America. It has a tough green scaled skin and creamy white pods of sweet pulp that hold shiny black inedible seeds. The texture and flavor of the flesh is similar to custard. Custard apple is typically eaten raw and can also be added to fruit salads, smoothies, milk shakes, and ice cream.

Also known as carambola, star fruit is originally from Southeast Asia. It has a yellowish green skin that can be eaten, and yellow or green colored flesh. Star fruit have five points that resemble stars when sliced. Its flavor is described as sweet and sour and the flesh has a texture similar to a grape. Star fruit can be eaten raw, added to salads and pies, or transformed into jam, jelly, and chutney.

Mangosteen is originally from the region surrounding the Indian ocean. It has deep purple skin and creamy white pods of flesh. Mangosteen has a sweet flavor that’s similar to peach and pineapple. The flesh is soft and is typically eaten raw. Mangosteen is also delicious juiced.

Originally from Malaysia, rambutan has hairy red skin and creamy white pulp that’s similar in flavor to a grape or a pear. It belongs to the same family as lychee. Both the skin and the pit are inedible. In addition to eating rambutan fresh, it can be added to fruit salads, ice cream, sorbet, and curries. 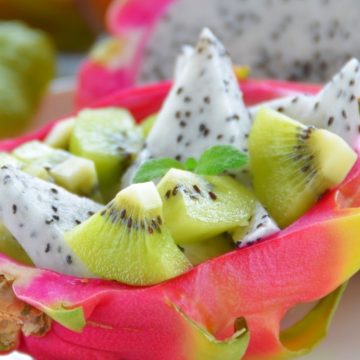