Poblano peppers are a staple ingredient in Mexican households. They can be eaten raw or cooked and have a mild flavor.

This simple recipe for poblano peppers blackened on the stovetop couldn’t be easier to make. Read on to find out how to prepare these Mexican delicacies in your home.

What Are Poblano Peppers?

Poblano peppers originate from the state of Puebla in Mexico. They start dark green in color and ripen to brown or dark red. Most poblano peppers are picked when green to use in cooked dishes.

Green poblano peppers are crisp and have a touch of earthy flavor but are not spicy. Red poblanos are sweeter. Dried poblanos, known as anchos, are earthy, sweet, and smoky.

How to Cook Poblano Pepper

No. Poblanos have a hint of spiciness but are not really hot.

Poblano peppers are a good source of vitamins A and B2. They also contain quercetin, a cancer-fighting antioxidant, and may play a role in helping to prevent heart disease and diabetes. Poblano peppers help to reduce chronic inflammation and can boost immunity.

Is A Poblano Pepper The Same As A Bell Pepper?

Is A Poblano The Same As A Jalapeno?

No. Both peppers are from Mexico but they’re not the same. They differ in appearance, and jalapenos are a lot spicier than poblanos.

Is A Poblano Pepper Hotter Than A Jalapeno?

No. Jalapeno peppers are hotter than poblanos. Jalapenos are between 2,500 – 8,000 on the Scoville scale of heat units, while poblanos clock in at 1,000 – 1,500 heat units. Poblanos are mild, while jalapenos fall into the low end of medium heat peppers. 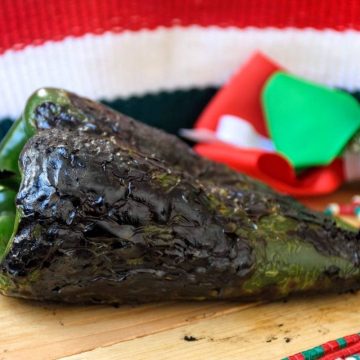 Author: Benilyn
Tried this recipe?Follow or tag us on Pinterest @izzycooking